Today Moscow is the home of more than 250 000 Jews, six Synagogues, several Jewish universities, a number of Jewish community centers, history museums and many educational organizations.

Jewish Moscow tour gets you acquainted with the Heritage of Jews residing in Russia and the capital before the Revolution, in Soviet epoch as well as modern Russia.

10:00 – meet your guide at the hotel lobby or any other place upon your request 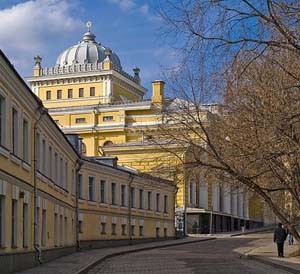 During this tour we will visit the oldest Choral Synagogue in Moscow, constructed close to the former Jewish settlement in Zaryadie, the one which continued to operate throughout the Soviet period despite all hardships of that time. The Synagogue hosts three rooms for prayers: for Ashkenazim, Sephardim and Caucasian Jews.
During the tour we will have the administrator of the Synagogue, Alexander, to answer your questions and talk about the history and the life of the Jewish community in Moscow.

Our next spot is Lubavichi Synagogue on Bolshaya Bronnaya street 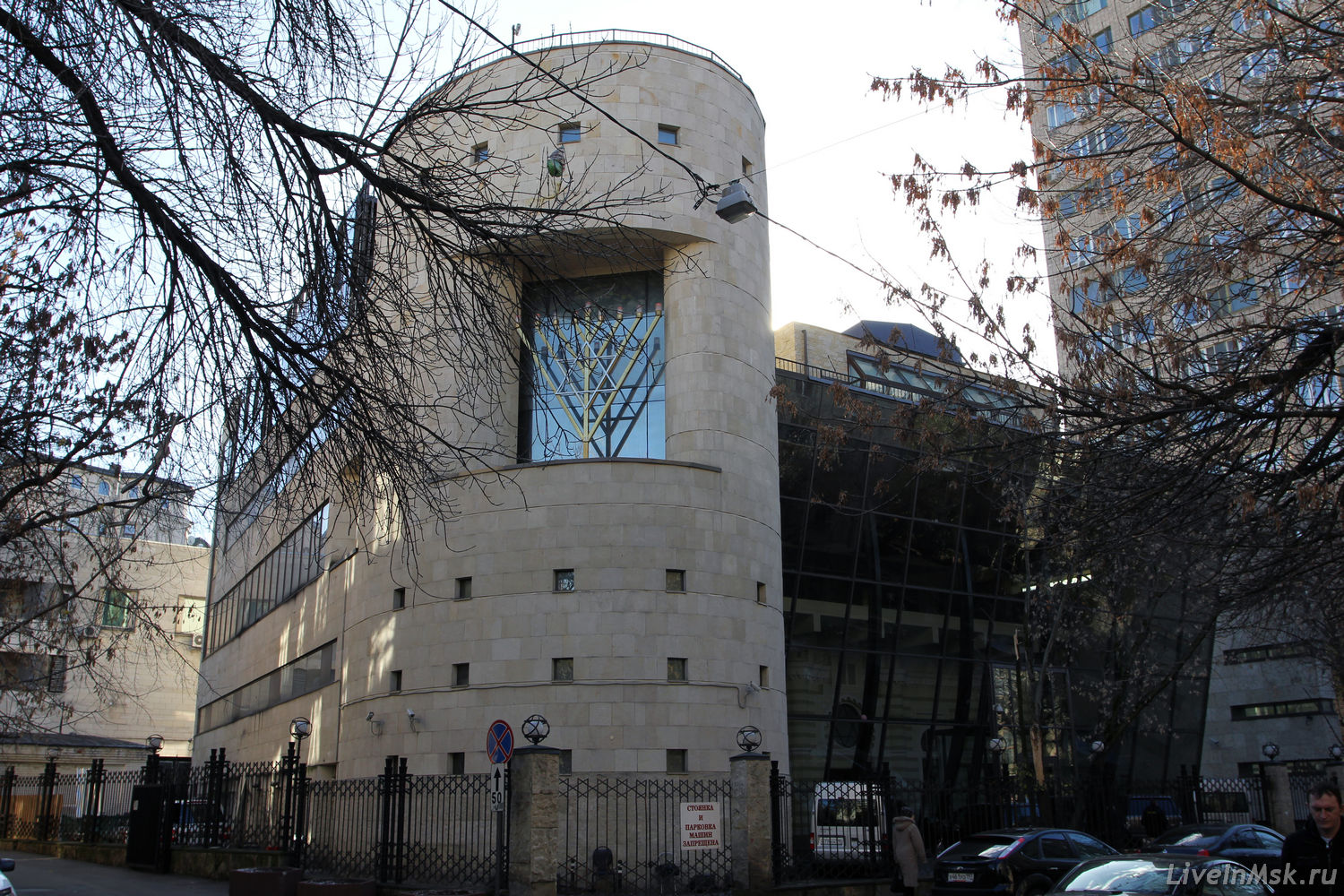 Chabad Lubavich Synagogue was constructed in 1880 through the initiative of Poliakov, a famous and wealthy railroad baron at the time.
Jews have always been persecuted and during Stalin’s time, the Chabad Lubavich Synagogue was forcibly shut down by order of Stalin at the height of his terror in 1937. It was later converted into a cultural center and theater during the Soviet era. It was only after the Soviet era had ended in 1991 that the synagogue was returned to the Jewish community and served as a full-functioning place of worship again. In 2003 the synagogue was reconstructed , several stores were added above the historical building and today it is the house of several rooms for prayers, a kindergarden, a library, Holocaust and Sobibor museum, museum of Jewish life in Moscow, classrooms, a bookstore, a lecture hall, mikvah, kupa, kosher grocery store and the best meat kosher restaurant ”Jerusalem” in Moscow. 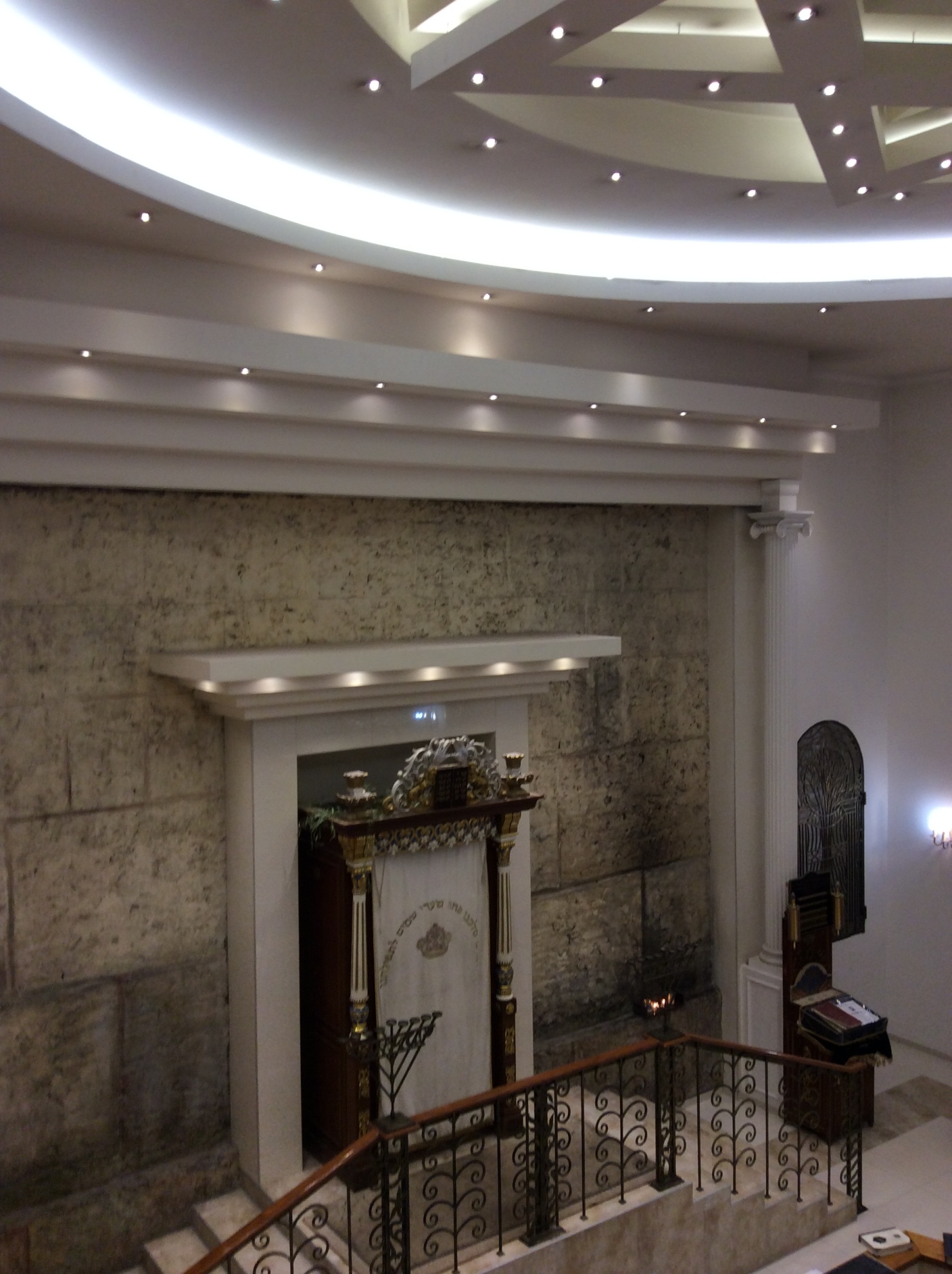 The Chabad Lubavich Synagogue holds regular services which are mostly in Hebrew. You will find the establishment quite pleasing.

The tour is conducted by Spielberg journalist Svetlana, who interviews survivors of the Holocaust and works for Spielberg organization and Moscow synagogue. If you have time , we will be happy to show you the movies in English about Sobibor survivors. During the tour, you also will have a chance to talk to locals Jews who survived Soviet time in Moscow and experience new Jewish life in Moscow.

Next we will visit JCC ( Jewish community center) in Marina Roscha and museum of Tolerance and Jewish history. 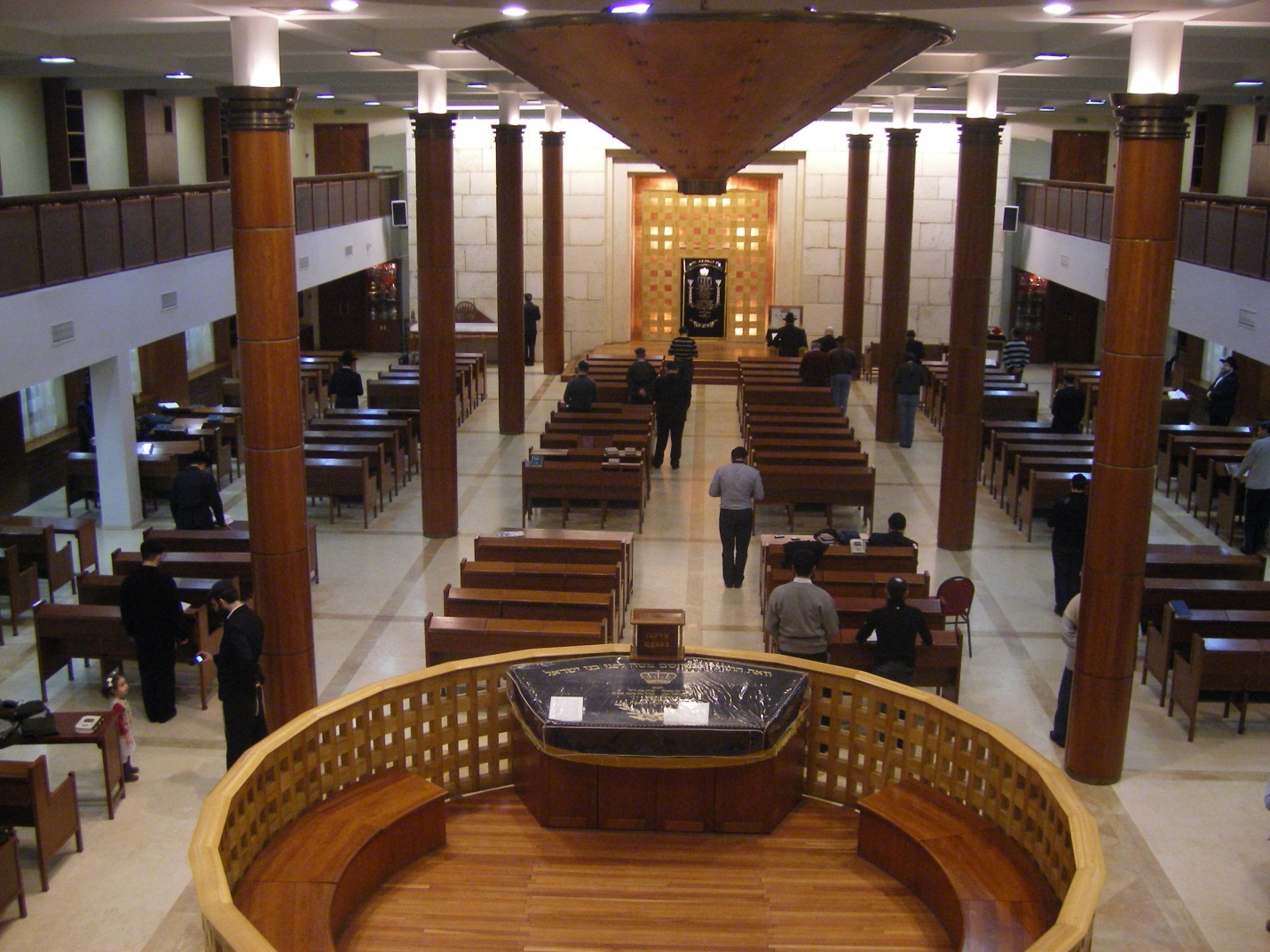 JCC in Marina Roscha is a place that never rests, with multiple daily services, two kosher restaurants (one meat, one dairy), and a plethora of educational and social programs. The community is an eclectic mix of Russian Jews, both religious and secular, with a large number of Israelis and Anglos. JCC contains Orthodox synagogue, gym, dating club, concert hall, exhibitions of Jewish painters, etc. The neighborhood also has kosher grocery stores, publishing house, Jewish medical center called after Rambam, Charity center. You will have chance to see all the services provided by JCC and talk to local Jews who are happy to share their impression about their life in Russia after the USSR.

Our next stop is museum of Tolerance and Jewish history.
http://www.jewish-museum.ru/en/timeline

The main goal of the Jewish Museum & Tolerance Center is to establish a creative, interactive platform for dialogue between different cultures. 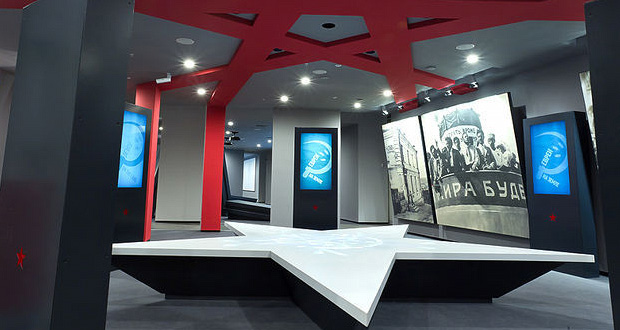 This ground-breaking museum, designed by Ralph Appelbaum Associates, is divided into 12 galleries and features a host of high-tech displays based on the latest interactive media technology. These range from a huge computer with touch screen like a giant iPad to a unique 4-D circular cinema, where viewers can experience wind, smoke, smells, splashing water and vibrating seats as they enjoy a spectacular 10-minute film called The Beginning, evoking the Creation of the World. 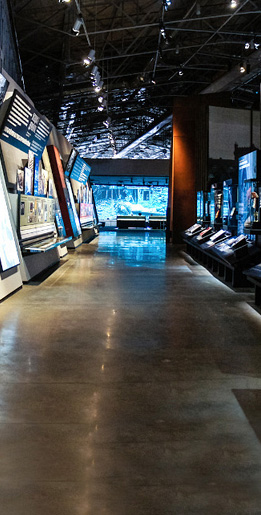 Other galleries evoke the lives of Russian Jews since the late 19th century, with exhibits ranging from letters and photographs to a T-34 tank and PO-2 aeroplane. Historians will be enthralled by secret documents — specially declassified by Russian Security Chief Nikolai Patrushev — relating the fate of Swedish diplomat Raoul Wallenberg, who saved tens of thousands of Jews during World War II. Visitors can wander through a cobbled market-square from Tsarist times to the thunder of approaching hooves — then hear the rat-a-tat-tat of gunfire from the Great Patriotic War (as Russians refer to World War II).

Visitors with a couple of hours to spare are able to gain an intriguing overview of the Museum, but its innovative format is designed to provide whole families with an enjoyable and stimulating full day out. There is a Library, Museum Shop, Research; Centre, Conference Halls, Children’s Centre and Kosher Café, and the Museum will also stage temporary exhibitions and joint projects in conjunction with leading institutions from around the world.

The Tolerance Center is an integral part of the Jewish Museum, occupying a special area with its own entrance. The Center aims to teach children the need for tolerance, respect and mutual understanding, and will also stage courses for teachers — helping them to approach the subject of tolerance lucidly and visually in their classes.

Both youngsters and adults will be encouraged to discuss the relationship between different cultures and individuals.

Blending history, culture, education and the latest technology within a unique architectural setting, the Museum is set to become one of Moscow’s key cultural landmarks. 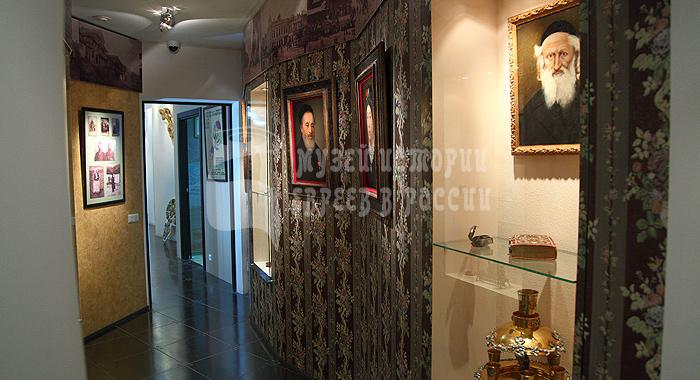 The Museum of the Jews’ History in Russia is happy to present you its exposition. Almost all the displays are the original ones, the evidences of a reality already gone.

For the most part in our Museum the history of the part of Jewry that had fallen under in the power of the Russian crown after three partitions of Poland is represented. In everyday life culture, religious traditions, language, customs this group was genetically connected to Ashkenazi Jews – the European Jewry. This is the name of the Jews, migrated to Poland from Germany and North France in the Middle Ages. As Fate willed, they became the subjects of the Russian Empire, but they weren’t given any rights even the right to freedom of movement. The region of their traditional habitation that used to play an important economic role in the days of the Poland’s independence, became a distant province of Russia – the Pale of Settlement. 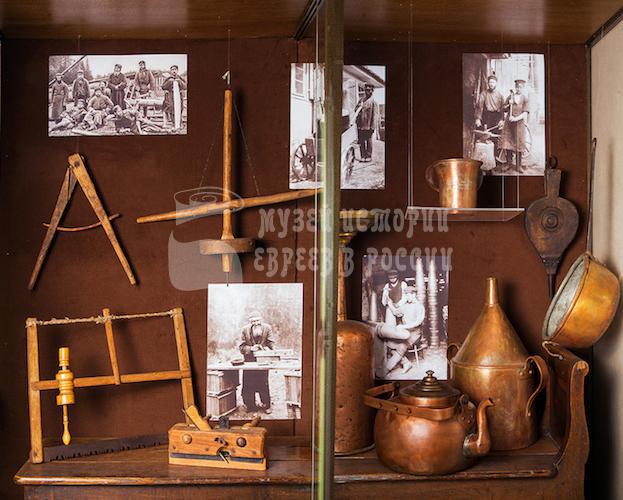 Nevertheless, having gathered sufficient number of exhibits the Museum opened in May, 2012 a special section dedicated to the history and way of life of the non-Ashkenasi, but Bukhara, Mountain and Georgian Jewish Communities.

Today the exposition of the Museum may be conditionally divided on two parts:
– traditional culture – prevalent forms of community existence, education, charity, particular features of everyday life, observance of religious directions, “sacred service” (decorating synagogues and religious items); to this part it should be needed to ascribe the collection representing traditions and culture of non Ashkenasi Jewish Communities to this part of the exposition;
– historical processes – mutual relations between the Jews and the society and authorities, the Jewish contribution into economy, culture and science development, a Jewish experience of land utilization and an attempt of creation of Jewish Autonomy in the USSR.

The Holocaust Memorial Synagogue  is a synagogue located on Poklonnaya Hill in Moscow. It was built in 1998 to complement an Orthodox church and a mosque that are also part of the outdoor museum dedicated to Russia’s victory in World War II. 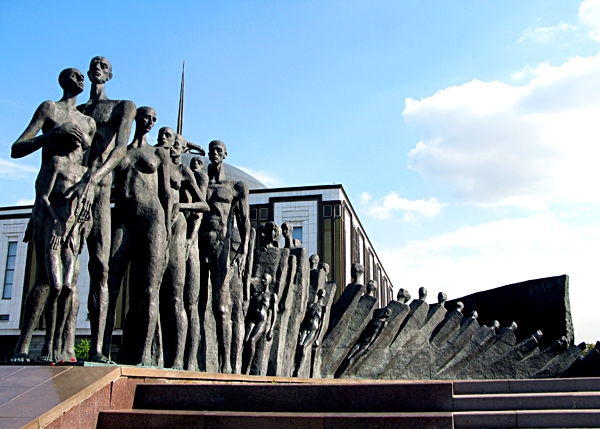 The building of the Temple of the Memory on Poklonnaya Gora, a flat hill in the West of Moscow, between the Setun River and another hill, was constructed and opened on September 1998 in Boris Yeltsin‘s presence. The construction of the Temple of Memory was financed by the Russian Jewish Congress – a non-profit charitable fund and the largest secular organisation of Russian Jews.
The Temple of memory architect was Moshe Zarhy (Zarhy Architects) from Israel. In the Holocaust Memorial Synagogue there is a hall with a balcony, the offices for the rabbi and a library. An exhibition about history of the Jewish people and the Holocaust was located in the building. The building is also used as a museum.
The interior of the building was designed by Frank Meisler, too. Meisler created wall sculptures showing Jerusalem, the Twelve Tribes of Israel and the Five Books of Moses.

The most popular Jewish souvenir to take home is Jewish Matreshka doll.